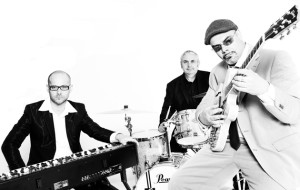 THE SOUL JAZZ UNIT is a trio that started to take form in 2012 from an idea of guitarist / producer Pierluigi Masciarelli, whom in the 90’s was a former member and composer of acid jazz Outfit ‘Babyra Soul’, which together with Emiliano Pari (organ / vocals) and Marcello Surace (drums) give life to this innovative music project which finds itself right in the centre of the Italian Jazz scene. Initially, the trio has performed proposing a number of classic standards from 60’soul jazz repertoire, a period in which American jazz musicians began to mix traditional Jazz with Grooves, harmonies, rhythm and blues’ riffs, gospel and funk. Leaders at that time of this scene, such as Cannonball Adderley, Horace Silver, Grant Green, Wes Montgomery, Jimmy Smith, Lonnie Smith, Jack Mcduff, George Benson, Sonny Stitt, are just some of the names that “organ trios” line-ups were so much influenced by. Early this year, the Band decides to record their first album titled, “Old School Recipes”.