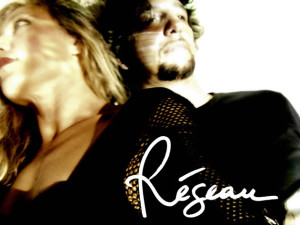 Réseau’s music is composed and arranged by the composer, drummer and vibraphonist Fabrizio Fratepietro.

He’s already known as the founder of one of the most important Acid Jazz reality in Italy, BabyraSoul, produced by the famous star Lorenzo Jovanotti, and in his career Fabrizio has been trough many collaborations with important international artists. He is the Gabin’s drummer since 2005 traveling in tour in maineuropean cities and countries like Russia, Ukraine, Lituania, Polland, Unghery, Kazakistan, Georgia, Rep. Cecz and others. With Gabin has collaborated withChris Cornell (Sound Garden), Moses (Zero Seven), Mia Cooper. Other international collaborations are with the artist Z-Star (Slow Train Soul), playing with her in London, Geneve, Moscow and all over Italy.

Another artist he has worked with is Chiara Civello (famous pop-jazz singer living between New Yorkand Rio de Janeiro), having the pleasure to perform with the famous brazilianpop-star Ana Carolina.

In Italy he has played with some of the best italian pop-stars like Daniele Silvestri, Paola Turci, AlexBritti, Riccardo Sinigallia, Orchestra di Piazza Vittorio, Rocco Papaleo, just to name a few.

He is also the Nat GeoMusic spot testimonial, released by Mercurio Film.

Réseau will be presenting with a seductive combination of electronics, Visual Art & Dance.

It is a parallel universe in which electronica and the less conservative side of jazz are mixed freely between asymmetrical arrangements and intense rhythms. The project celebrates the sound of the “rhythm”: contemplative electrojazz topped off with a mixture between electromusic and antique Tap dance’s rhythm, that perfectly embodies the eternal tension between past and present,emotion and electronica: celebratory, intimate and full of energy, all at the same time.