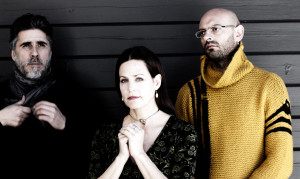 Kalweit and the Spokes is a project that came about through a side collaboration between Minneapolis born vocalist Georgeanne Kalweit, Mauro Sansone and Giovanni Calella. Even though all three come from different music scenes, together they have found a road back to the heart of a more core sound. The result is a surprising melding of “old school blues”, folk and post-punk, worked out in its most essential form in which the song remains the focal point. The songs form intricate pathways, both real and imagined, and are inspired by mysterious characters like silent film diva Clara Bow, or by a painting, as in New York Movie by Edward Hopper, and describe the poetic landscape of the Kalweit and the Spokes. The lyrics come from poems and micro stories written by Georgeanne which are set to music by Leziero and Giovanni, and are up close reflections of the social-political unrest of our times (Guns are Back and Split us in Two). In the debut album Around the Edges, the guitar, drums and voice are all clearly crucial elements, though they are not the only ones. Organs, various noises and sounds, a harmonica and percussion complete the cornucopia. The songs come to life spontaneously and, at times, out of the blue, like in Ice Man, dedicated to Otzi, the man found in the ice after 5.000 years in the Italian Alps. Through a careful selection of images and sequences from films that have tonalities familiar to the sound, which are projected during the live performances, the experience becomes almost sensorial, where music and choreography intermingle, leaving room for the audiences’ imagination. Theatrical and somewhat eerie nuances turn the concerts into happenings full of surprises, without ever compromising the rock and roll nature of the show.  The band has been busy performing live prior to the release of the album. The need to allow the songs to be lived out in a physical setting, in direct contact with the public is a strong point in the project. The three musicians have been active in the Italian music scene for many years, over a wide range of areas that embrace the most varied of art forms.
The painting on the album cover is in fact by Georgeanne, who is also a painter. Around the Edges is inspired by the colors and scents of the Salento area, in South Eastern Italy, and the deserts of the American South West.

KALWEIT AND THE SPOKES Discography:

2 Replies to “KALWEIT AND THE SPOKES”

Is that really all there is to it beacuse that’d be flabbergasting.

Your article perfectly shows what I neeedd to know, thanks!