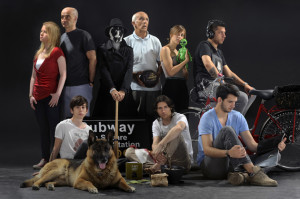 JoyCut produce a mesmerizing and conceptual sound based on dilated and biting electro sound. The band recently supported Editors on tour and is now releasing “PiecesOfUsWereLeftOnTheGround”. JoyCut is also managing a gigantic campaign “Ghost Trees Forest” which pays careful attention to our sustainable future. In recognition of this the new album will use cellophane tape from 100% biodegradable material and both the vinyl CD and booklet are made from recycled products. That’s the reason why JoyCut strongly started to record their works in solar powered recording studios. In September 09 they were invited to the Co2penhagen Festival in Denmark (with artist such as Mercury Rev, Tv-2, Lars H.U.G.). In October 09 they flew to Spain to participate at the Monkey Week and in November they also played in Ireland appearing as guest on the Balcony-TV Show. In the meantime they have performed all over Europe for a brand new pre-release-tour, hitting Croatia, Germany, Denmark, Holland, Ireland, Spain, UK and Canada for the Canadian Music Fest 2010. They have shared the stage with Arcade Fire and Modest Mouse @ Independent Day 2010. JoyCut’ Last Album 2011’s “Ghost Trees Where To Disappear” was a huge success: a triumph of sorts. Over the whole of 2011 they toured mainly Italy, touching London, enjoying remarkable huge success with audiences and critics. They performed everywhere, also in acoustic, even among and under real trees. From that experience, in fact, they pulled out of the hat a “natural” version of the album entirely recorded and played unplugged. In an age when everything about a new band is splattered across various social media, JoyCut are something of an anomaly. From refusing to show their faces in early photos, they’ve already marked out themselves as oddball geeks. The New Coming Album “PiecesOfUsWereLeftOnTheGround” will be lyrically their new astonishing debut. It’s hardly a knicker-dropping missive, but good god, they make Mystery sound Sexy.