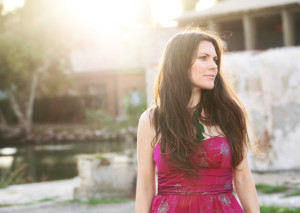 Ida Landsberg is a singer, pianist and songwriter. Born in Berlin, after some years of classical singing lessons with Renate Dasch (mother of the opera singer Annette Dasch), she studies music from 1998 to 2000 at the Berlin University of Arts with Jutta Schlegel (voice), Marek Bobéth (piano), Martin Ripper (flute), Jolyon Brettingham-Smith and Bodo Bischoff (music theory), Harald Schwarz (choir direction) and moves to Tuscany in 2000, initially for a student exchange but emigrates definitly to Italy because of sentimental reasons. She takes lessons at the Siena Jazz School, studies jazz improvisation, ear training and participates at different master classes and workshops held by Marco Tamburini, Cheryl Porter, Carl Verheyen, Greg Koch, Robben Ford and other. Since 1998 Ida plays gigs as a jazz and bossa nova singer in clubs and venues, theatres, in the radio, at festivals and events both in Germany and Italy. Just to name some of them, she sang at the “Villa Celimontana Festival” (Rome), “Cantiere Musica” (Anguillara), “Note di Montecucco” (Campagnatico), “Festival del Giornalismo” (Orbetello), Teatro Eliseo, Teatro Anfitrione (Rome), “Disma Music Show” (Rimini), “Capalbio Libri” with Tony Renis, at Massimo Nunzi’s radio programme “Jazz a Nota Libera” together with Lino Patruno and many clubs all over Italy. She performs with different groups, from the minimal duo with her long time guitarist – and now husband – Simone Salvatore to the whole big band. In the past years she had the honour to collaborate with many excellent musicians such as Frank Gambale, Marco Guidolotti, Francesco Poeti, Ferruccio Spinetti, Emilio Soana, Andy Gravish, Mirco Mariottini, Piero Borri, Giampiero Grani, Angelo Olivieri, Marco Caudai, Stefano Bagnoli, Angelo Ferrua, Romano Pratesi, Olivier Renne, Lello Pareti, Matt Smith, Alessio Buccella, Katie Mullins, Michele Makarovic, Michele Santinelli and many others. EQ Music Singapore released her first two solo albums “Jazz Moments” with piano player Francesco Moraca, “Acoustic Bossa Nova” with guitarist Simone Salvatore – that was published again by Hitman Jazz (Thailand) – and innumerous compilations. Futhermore she published different soundtracks for the iPhone game “1112” (Episode 02 and 03) together with the skilled sound designer Dimitri Pachkov and for the Italian national TV (RAI), as well as some electronical music with DJ Nicko Vee and 11 Inch released by the independent labels Salto Recordings, Aux Audio and Tenor Recordings. IRMA records just published her album “Cherry Tree Lane”, the first one with unedited songs.

“Cherry Tree Lane” reflects the different stylistic influences of the artist: the elegant retro sound of her songs recall Burt Bacharach, the Beatles, Pat Metheny but also Débussy or Satie. Important collaborations such as Frank Gambale, Andy Gravish, Ferruccio Spinetti and Marco Caudai contribute to the unique sound of this musical project, with its eclectic but harmonic style thanks to the fil conducteur of the instruments used throughout the album: piano, brass, guitar and drums. The stylistic variety of the themes is not only a result of the long space of time in which the songs were written, but are also a mirror of the singer’s life: born in Berlin, where she passes her adolescence and studies music at the University of Arts Berlin, in 2000 she moves to a small Italian village and continues her musical studies at the Siena Jazz School. The cultural difference of the two dimensions couldn’t be bigger: a life in one of the most vibrant cities of the century, frenetic and agressive, anonymous and adventurous and the quiet life in a small town in the middle of two lagoons, a natural oasis with flamingos, the Mediteranean Sea, olive trees and horses where human relations are the main resource.

“Cherry Tree Lane” is the union of both worlds. The songs speak about love, dreams, desire and describe different life episodes in a new enchanted environment. Hence the title of the album that refers to the street where Mary Poppins one day lands with her magic umbrella: just as she will change a cold and anonymous world into a universe of fairy tales, so the protagonist of the present album finds herself in an enchanted country, full of flowers, seductive perfumes and contrasting sensations.