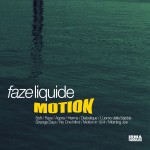 Faze Liquide is a collective of Italian jazz musicians lead by Alessandro Meroli, Nicola Negrini and Nico Menci. They got together in the year 2000 to work on a new sound, a rhythm with electronic, psychedelic suggestions, widely based on improvisation and with rich, daring horns arrangement. Their debut is the instrumental “Morning Joe”, released by Irma records in 2002 as part of the compilation “Formentera De Dia”. In 2004 the prestigious German label Sonar Kollektiv releases their first 12″ titled “Diabolique”, including a remix by Volcov. Among their early supporters there is Gilles Peterson, who played their music during his show “Worldwide” on BBC Radio1 and their music starts to appear on playlists all over the globe. In 2004 they collaborate also with Californian DJ/musician/producer Ricci Rucker, the outcome is the 12″ “Like A Box Of Chocolate” released on the US label EOF. In 2005 they have their tune “Kirkness” published in the compilation “SonarKollektiv 4”. This year, after a long pause, sees the release of “Motion” for Irma records, including “Morning Joe” and 9 unreleased tunes.

One Reply to “FAZE LIQUIDE”