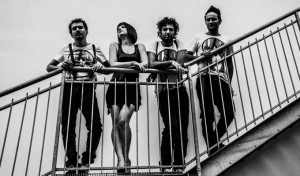 Couture Chic begin their musical journey in 2010 from a lucky encounter between 4 young musicians: Vanessa Chiappa (vocals), Luca Gabbianelli (guitar), Thomas Bianchi (double bass) and Marco Bellagamba (drums), each one of them has been involved previously in important music projects both at National and International level (Steve Lyon, Howie B, Nomadi, Max Pezzali, etc). In their Live Shows Couture Chic go through a musical trip starting with a sound reminding us of the fifties and ending with today’s  classics, covering a number of Hits of the International Pop Rock repertoire in a bossanova, lounge,  nu jazz and swing mood. From Michael Jackson to Madonna, from The Beatles to Bob Marley, from Deep Purple to Guns ‘N’ Roses until we even get to Lady Gaga and James Blunt, so many great Artists that Couture Chick Care to cover in their Shows, in a mix of Sounds, an exotic and grabbing Groove, made easy by the four members contributing to keep the arrangements interesting and never dull throughout. The Band has been active on the Live circuit for a while and have played in many Italian Venues, Theatres  and Jazz Clubs, presenting a Show that is both high in Music quality and scenic performance, with a refined look that reminds us of the retro scene reintroduced to the present day.
Elegance, warmth and sensuality translated into music to create an enveloping sound, capable of projecting the public on the shore of a beach at sunset, and to accompany him on an interesting journey where timeless songs wink at contemporary sounds, highlighting the creativity and the musical taste of the band.
In the fall of 2012 the collaboration with IRMA records begins, which leads to the release of their first album titled “Velvet Bossa”: 12 intense rearranged Covers that synthesize the artistic project of the Band and highlight the musical versatility of Chic Couture, ranging between different genres until they manage to create their own characteristic sound. The album, entrusted to the Artistic Production of Riccardo Rinaldi (Aeroplanitaliani, Sud Sound System) relies on the participation of nationally known musicians: among them, the Internationally know trumpet player Massimo Greco (Zucchero “Sugar” Fornaciari, Neffa) and the excellent piano player Alessandro Garofalo (Sud Sound System).